By Peter Jacobsen - New York Gov. Andrew Cuomo finds himself in a much different position now than he was in just a few months ago. It was only October of last year when the governor published his book, American Crisis: Leadership Lessons from the COVID-19 Pandemic. The book was hugely successful, breaking into … Why Andrew Cuomo’s Cover-Up Scandal Isn’t Just a Case of One Bad Apple is original content from Conservative Daily News - Where Americans go for news, current events and commentary they can trust - Conservative News Website for U.S. News, Political Cartoons and more. 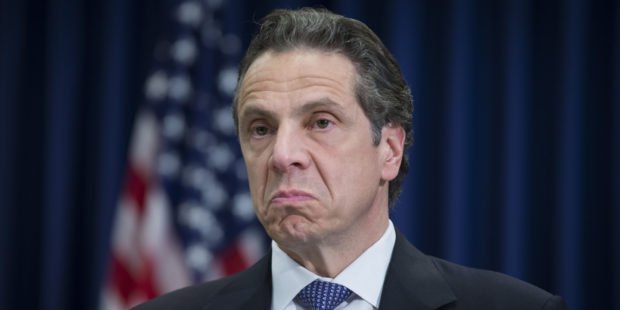 New York Gov. Andrew Cuomo finds himself in a much different position now than he was in just a few months ago.

It was only October of last year when the governor published his book, American Crisis: Leadership Lessons from the COVID-19 Pandemic. The book was hugely successful, breaking into the top 10 of the New York Times bestseller list. Cuomo’s political career was looking up, too, with many seeing him as a potential 2024 presidential contender.

However, things have changed abruptly for the governor, whose fall from the graces of the political establishment has been far and fast. Recently, he has landed in hot water due to several allegations of sexual misconduct. And, as I’ll focus on in this article, Cuomo’s cover-up of New York’s disproportionately large nursing home death rate has risen back to the surface.

Skeletons in the Closet

The motive seems clear. The high death rate is almost certainly linked to Cuomo’s decision to require nursing homes to accept sick, COVID-positive residents back into their communities. This report by James shocked many, as it appears Andrew Cuomo and his staff are responsible for withholding information that may have been able to save thousands of lives.

This report, though heart-wrenching, should not be shocking. It isn’t that Andrew Cuomo is just one bad apple in a good system. The political system, by its very nature, rewards and promotes politicians who hide knowledge that makes them look bad.

The Economics of Cover-Ups

To explain why, we need to understand the incentives elected officials face.

Politicians don’t make profits or losses from the successes and failures of their policies. In other words, they don’t have “skin in the game.” The money spent comes from the taxpayer, so if it is used poorly, the taxpayer is the primary loser. Unlike a business owner, politicians don’t get financially rewarded by being good stewards of scarce resources.

In economics, we say that politicians aren’t the “residual claimants” of their policy decisions. Instead of earning profit and loss based on their decisions, our political system tries to hold politicians accountable democratically. The idea is that voters can reward and punish politicians with their votes.

But this instrument is flawed because it assumes voters are actually informed about policies. In reality, they often aren’t and don’t have the incentive to become informed. Consider the case of nursing homes. The average voter has very little reason to be informed about Cuomo’s policies because they aren’t directly impacted. Economists call this “rational ignorance,” because it makes sense to be ignorant of things that don’t impact you if learning about them is costly.

Catering to rationally ignorant voters gives politicians perverse incentives. With a limited time in office, it makes sense to “get while the getting’s good” and capitalize on the power of the office. When elections do come around, politicians will have an incentive to pander and hide information that reflects poorly on them.

Consider the incentives involved in Cuomo’s decision to hide nursing home data. First, he had a book coming out on his leadership during the COVID-19 crisis which could provide him income from sales. On top of this, he was receiving widespread adulation and his political prospects were continuously improving. Releasing the nursing home numbers would’ve ruined all of this.

In contrast to the political environment, the infamous case example of the exploding Samsung Galaxy Note 7 is actually an example of people facing up to, and going public with, inconvenient truths.

The Note 7 was released in August of 2016 to very good reviews. However, in September of the same year, reports began to roll in that the battery of the phone had a chance of catching fire and exploding. After initial reports, Samsung investigated what was causing the problem while putting a recall in place while they replaced the bad Note 7’s with new versions. However, after replacements continued to have issues, Samsung discontinued them entirely just two months after release in October.

The recall was estimated to cost Samsung $5 billion. For context, in 2016 Samsung made approximately $26 billion in operating profit. In other words, this was a huge loss. This cost involved taking a loss on all Note 7 phones, as well as bribing consumers to return their Note 7 phones.

Samsung was so quick to use the information of defective phones because of the incentives they faced. Denial of the exploding phone problem might have saved money and avoided bad press in the short run, but the damage to the trustworthiness of Samsung’s brand would have been far costlier in the long run. So, they owned up to the failure and did what was necessary to fix it.

Samsung’s owners, unlike politicians, are the residual claimants of the decisions they make. If Samsung decided to use their financial capital to cover up the incident, the owners knew it would blow up in their face and cause their stock to plummet along with future sales.

Likewise, the incentives consumers faced helped the response. Samsung knew the Note 7 couldn’t succeed because customers have a strong incentive to be informed about whether their phone will detonate in their pocket or on their nightstand. Unlike voters who are rationally ignorant about nursing home policies, consumers tend to be rationally informed about the products they buy.

Unlike political institutions, market institutions provide the incentive for companies to utilize and discover information about whether their products and practices will harm consumers.

In his famous business book, Good to Great, Jim Collins and his team rigorously researched and analyzed the factors that separate businesses that are just good and businesses that make the leap from good to great. Collins looked carefully at the relationship between information and great business success, writing:

“We live in an information age, when those with more and better information supposedly have an advantage. If you look across the rise and fall of organizations, however, you will rarely find companies stumbling because they lacked information. (…)

Indeed, we found no evidence that the good-to-great companies had more or better information than the comparison companies. None. Both sets of companies had virtually identical access to good information.”

What made the difference, Collins found, was not access to information, but how a business approached and utilized information—especially unwelcome information. According to Collins, “all good-to-great companies began the process of finding a path to greatness by confronting the brutal facts of their current reality.”

“Confronting the brutal facts” is exactly what Samsung did and exactly what Cuomo refused to do. Collins’s finding lines up with the point that our market system causes businesses to act on knowledge in a way that benefits consumers.

This argument is laid out by economist Richard Wagner, in his book, To Promote the General Welfare. His analysis, which I use here, shows why government institutions will tend to generate and utilize knowledge differently than market institutions.

As Dr. Wagner puts it, “developing the best possible knowledge about policy measures is always a concern, but analyzing the strength of the incentives to create and utilize knowledge is also of major consequence.”

In response to this institutional analysis, some might object by pointing out examples of companies that have tried to cover up product issues. Likewise, dissenters could argue that the fact that Cuomo is now being punished is evidence that the system works.

However, the point isn’t that companies are always 100% transparent or that all political scandals will go undiscovered. Instead, it’s that different institutions provide different incentives. When someone owns a company, they lose money if they devalue it with a scandal. Cuomo can’t sell his position and therefore stands to lose less. In fact, even if Cuomo is voted out, his book deal which allegedly went for $4 million, remains.

Yes, there are certainly some examples of politicians being punished by voters or companies trying to engage in cover-ups. But these examples happen despite the institutional incentives rather than because of them.

So, although Governor Cuomo’s actions are abhorrent, they shouldn’t be surprising. His scandals aren’t a case of one bad apple, but reveal inherent flaws in our political system.

This article was originally published on FEE.org

Why Andrew Cuomo’s Cover-Up Scandal Isn’t Just a Case of One Bad Apple is original content from Conservative Daily News - Where Americans go for news, current events and commentary they can trust - Conservative News Website for U.S. News, Political Cartoons and more.

Whopping 46 Percent of Republicans Would Disown GOP for...