A U.S. Marine with the 24th Marine Expeditionary Unit (MEU) carries a baby as the familiy processes through the Evacuation Control Center (ECC) during an evacuation at Hamid Karzai International Airport, Kabul, Afghanistan, Aug. 28. (U.S. Marine Corps photo by Staff Sgt. Victor Mancilla) The mission continues — for now. The post The US withdraws under fire as the Afghanistan evacuation nears its end appeared first on Task & Purpose. 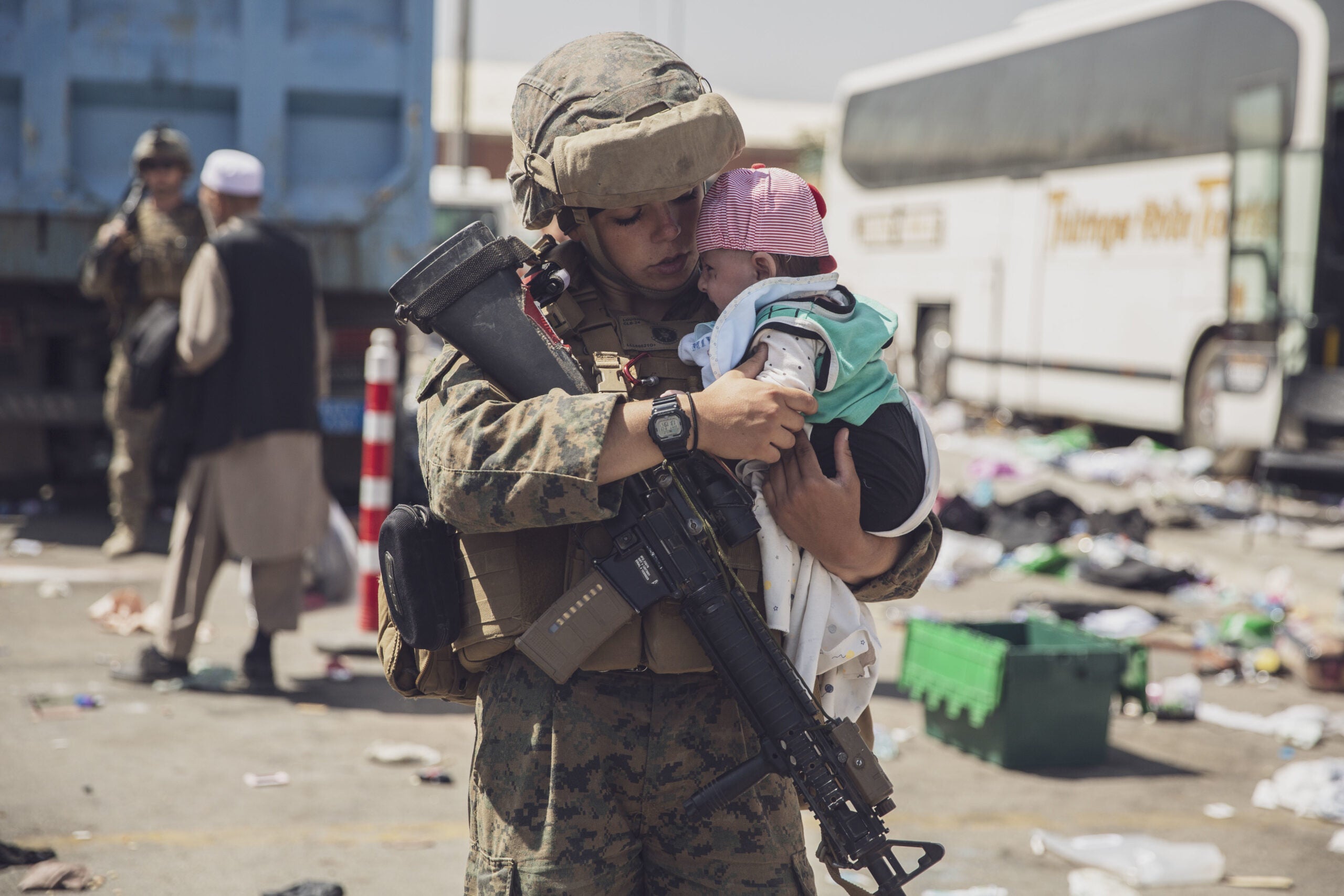 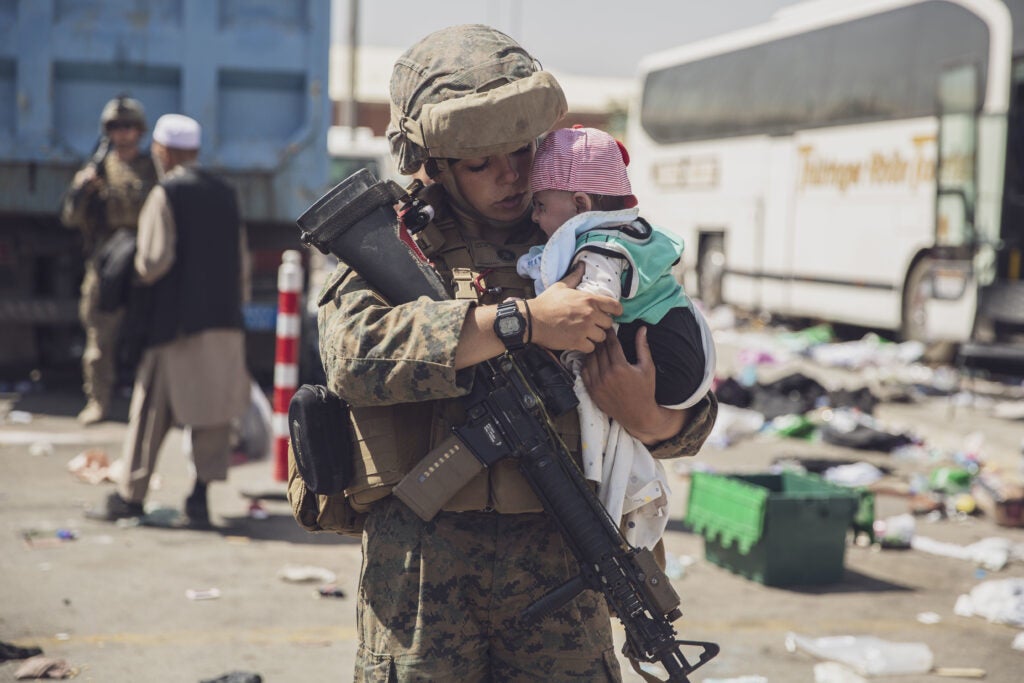 Terrorists are continuing to try to kill U.S. troops at Kabul’s international airport in the final hours of the Afghanistan evacuation.

A counter rocket, artillery, and mortar system (C-RAM) at the airport shot down one of the projectiles; another rocket landed inside the airport’s perimeter but did not affect the U.S. military’s mission; and the remaining three rockets did not hit the airfield, defense officials said on Monday.

The Islamic State group in Afghanistan has claimed responsibility for the rocket attack, which highlights just how perilous the security situation at Hamid Karzai International Airport is as the last U.S. troops prepare to leave by the end of Tuesday.

Meanwhile, Task & Purpose continues to hear from sources that the Taliban are not allowing American citizens and Afghans with proper credentials to make it into the airport for evacuation flights, leaving them potentially stranded in Kabul.

The U.S. military’s focus now is on evacuating the people already at the airport, BBC World Service correspondent Nafiseh Kohnavard tweeted on Monday. American troops guarding the airport will eventually be replaced by “Taliban Special Forces.”

“Serious concerns about the moment that thousands of people outside Kabul airport will realise the US guards have left the airport premier as they may storm the runaway,” Kohnavard tweeted.

And there are no indications that the ISIS threat has abated at all.

Monday marked the second time in the past five days that Kabul’s airport has come under attack. A suicide bomber struck outside the airport’s Abbey Gate on Aug. 26, killing 11 U.S. Marines, a Navy corpsman, and an Army special operations soldier. Another 18 U.S. troops were wounded in the attack.

The Islamic State-Khorasan, or ISIS-K, claimed responsibility for the attack, which killed more than 170 Afghan civilians. Marine Gen. Kenneth McKenzie Jr., head of CENTCOM, told reporters on Aug. 26 that ISIS attacks against U.S. troops at the airport would likely continue.

Only 24 hours prior to the attack, Defense Secretary Lloyd Austin told military commanders to prepare for a “mass casualty event” at Kabul’s airport with Abbey Gate identified as the “highest risk” of being attacked, Politico reporter Lara Seligman first revealed. U.S. military commanders ultimately decided to keep the gate open to allow British forces to continue their evacuation from the adjacent Baron hotel.

When asked about the Politico story at a Monday news briefing, Pentagon spokesman John Kirby declined to say why U.S. troops were still guarding Abbey Gate at the time of the bombing if they knew roughly when and where the attack would occur.

“No. 3, I am absolutely not going to speak to a press story that was informed by the unlawful disclosure of classified information and sensitive deliberations here at the Pentagon,” he continued. “Just not going to do it.”

Politico stands by its story, said Brad Dayspring, a spokesman for the media outlet.

“As noted in the piece, POLITICO withheld information from the Pentagon readouts that could affect ongoing military operations at Kabul airport,” Dayspring said in response to Kirby’s comments.

President Joe Biden announced on Aug. 26 that he had ordered military commanders to “develop operational plans to strike ISIS-K assets, leadership, and facilities.”

The following day, the U.S. military announced that it had launched a drone strike against an “ISIS-K planner” in Afghanistan’s Nangarhar province, reportedly using the R9X variant of the Hellfire missile, which has been dubbed the “flying Ginsu” and “ninja bomb” because it uses flying blades rather than explosives as the killing mechanism to reduce civilian casualties.

Two “high profile ISIS targets” were killed in the strike and another one was wounded in the strike, Maj. Gen. William “Hank” Taylor, deputy director for regional operations for the Joint Staff, told reporters at an Aug. 28 Pentagon news conference. It was unclear if they had any role in the suicide bomber attack on Kabul’s international airport.

“The situation on the ground continues to be extremely dangerous, and the threat of terrorist attacks on the airport remains high,” Biden said in an Aug. 28 statement. “Our commanders informed me that an attack is highly likely in the next 24-36 hours.”

Then, on Aug. 29, the U.S. military launched another strike, this time against a vehicle in Kabul to prevent “an imminent ISIS-K threat to Hamid Karzai International airport,” according to Urban.

Urban initially said there were no indications that any Afghan civilians were killed as a result of the attack, but he issued another statement several hours later acknowledging that CENTCOM was aware of reports of civilian casualties.

“We know that there were substantial and powerful subsequent explosions resulting from the destruction of the vehicle, indicating a large amount of explosive material inside that may have caused additional casualties,” Urban said.  “It is unclear what may have happened, and we are investigating further. We would be deeply saddened by any potential loss of innocent life.”

UPDATE: This story was updated on Aug. 30 to include comments from Pentagon spokesman John Kirby and Politico spokesman Brad Dayspring.

The post The US withdraws under fire as the Afghanistan evacuation nears its end appeared first on Task & Purpose.

Review: Is the CRKT Woods Chogan T-Hawk a novelty or necessity?

Reba Whittle Was The Only Female POW In The European Theater...

What we know about the Marine veteran arrested for the...

Rethinking the U.S. military presence across the Greater...

Review: Walker’s Razor earmuffs are a welcome relief from...