Simon Parkes is a YouTube conspiracy theorist whose videos have been viewed by millions since he claimed to have information about "Q." 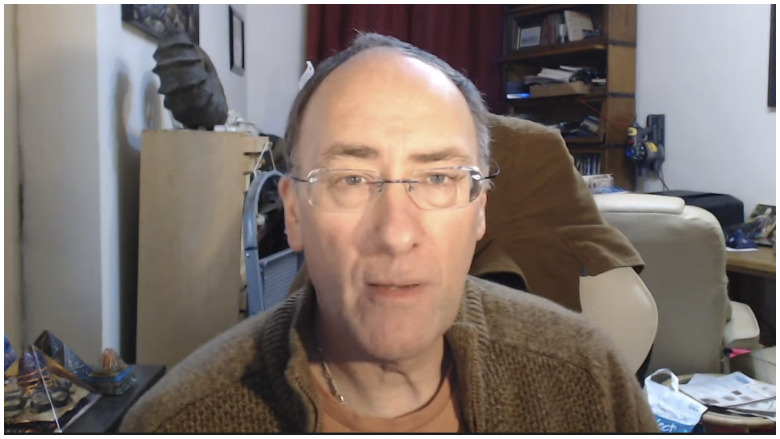 Simon Parkes is a conspiracy theorist whose YouTube videos about the discredited and controversial QAnon movement and President Donald Trump have been viewed by millions of people.

Disappointed Trump supporters have pinned their hopes on the conspiracy theories of Parkes, imparted through YouTube, according to Chronicles Magazine. He claims he is in direct contact with “Q,” which the magazine calls a “shadowy figure supposedly leading a pro-Trump conspiracy to unseat corrupt and evil forces in Washington, D.C.” He argues there will be a “great counter-revolution and legal disclosure” leading to a second Trump term.

In one of his videos, Parkes claimed there is a “person who’s responsible for maintaining the network.” He said that’s a “person I spoke to who has some incredibly accurate and interesting intel” and “is embedded with the Trump team.” It’s not the first time Parkes has spun wild conspiracy theories in the public square. He once claimed his mother was a green alien.

Although its theories are completely discredited, QAnon can be dangerous. It has fueled “real-world militant extremism,” according to The Washington Post.

Multiple people who are adherents to the discredited and unfounded QAnon conspiracy theory were identified as being present during the riots in the U.S. Capitol, including Ashli Babbitt, the military veteran who was shot and killed by a police officer as she breached a window into the Speaker’s lobby. The riots have results in deaths, charges (including against some QAnon followers), and the impeachment of Trump for a second time. According to CNN, QAnon followers played a “central role” in the Capitol riots.

According to the Post, QAnon believers think Trump is a “messaniac warrior” sent to fight Satanic and pedophile networks in government. Parkes argues in his videos that Trump is about to invoke The Insurrection Act of 1807. The theorists were also to blame for propagating the false Pizzagate conspiracy theory about a Washington D.C. restaurant.

Parkes Proclaimed, ‘There Is a Q’

Parkes’ YouTube channel has more than 600,000 subscribers. The page’s only content: Five videos he posted in the past three days, as of January 14, 2021.

The most recent is called, “13th January Update,” and starts with an American flag. He said YouTube warned him that he would be deplatformed, so he urged people to check out his website or videos on Bitchute instead.

“I talked about Q last night, and there’s been quite a big reaction. There is a real Q, and there are real Anons. But to my knowledge there aren’t QAnons.”

He continued, “There is a Q…orginally Q was four guys at a Quantam computer and it was purely a military operation…operates at or on the speed of light and is able to see into the future and predict…right back in 2016 and ’17, information was produced which has an absolute effect today. It’s playing out now.”

Parkes claimed “a number of teams were selected, and from that it’s grown organically. You can’t just be an Anon. You have to be accepted and really good at looking at the information and understanding it.” He said there was a group that had a paid job of going through affidavits. “They decided as a group that they would continue to maintain this database to keep it going.”

He added, the “Anon movement is unfunded and unpaid.” But he said there “has to be someone who manages the paperwork.”

On it, he claims that he “grew up in a family that had links to British and American intelligence. Simon’s mother worked for Mi5, however while she was managed by mi5 she was in reality working for the NSA. Simons Grandfather was employed by the Secret Intelligence Service, better known as Mi6. In reality he was reporting to the CIA. Simons Grandfather was also a British Diplomat, holding the position of Vice Consul and then Consul of the British Embassy in Pondicherry (Puducherry) India.”

According to the website, in 1936, his grandfather voted on whether to remove King Edward VIII “regarding Special Branches uncovering of a Nazi plot to infiltrate the King.” He voted to oust the king.

He claimed his mother worked on documents “related to crashed ufo’s which had been retrieved by American forces” in Germany. He said she died of suspicious circumstances.

Parkes Previously Claimed His Mother Was a ‘Green Alien’

It gets even more bizarre. According to as 2012 article in the Guardian, Parkes was a “local councillor” in England.

The Guardian reported that Parkes claimed “he was adopted as a baby by a 9ft tall, green alien which explained that she was his ‘real, more important’ mother. Later, when he was 11, she took him on board her spacecraft and a deal was struck about contact between the two worlds.”

He had just been elected to the town council in Whitby at the time. The Guardian quoted him as explaining:

Two green stick things came in. I was aware of some movement over my head. I thought, ‘they’re not mummy’s hands, mummy’s hands are pink’. I was looking straight into its face. It enters my mind through my eyes and it sends a message down my optic nerve into my brain. It says ‘I am your real mother, I am your more important mother’.

Parkes explained on his website, “During this period and before and after Simon had ufo experiences him self….In 2010 Simon went public with his experiences, and predictably was verbally attacked and ridiculed by the main stream media.”

He also had a New Age website that is no longer up.

READ NEXT: The Partnership of Siegfried & Roy.

Barely Back on Their Feet, UK Small Businesses Face Crushing...

What next? Americans wake up to election uncertainty