U.S. Army Capt. Shaina Coss. (Screenshot from U.S. Army video). “What inspires me as a leader is just the men and women that serve alongside me." The post Meet the first woman to lead elite Army Rangers in combat appeared first on Task & Purpose. 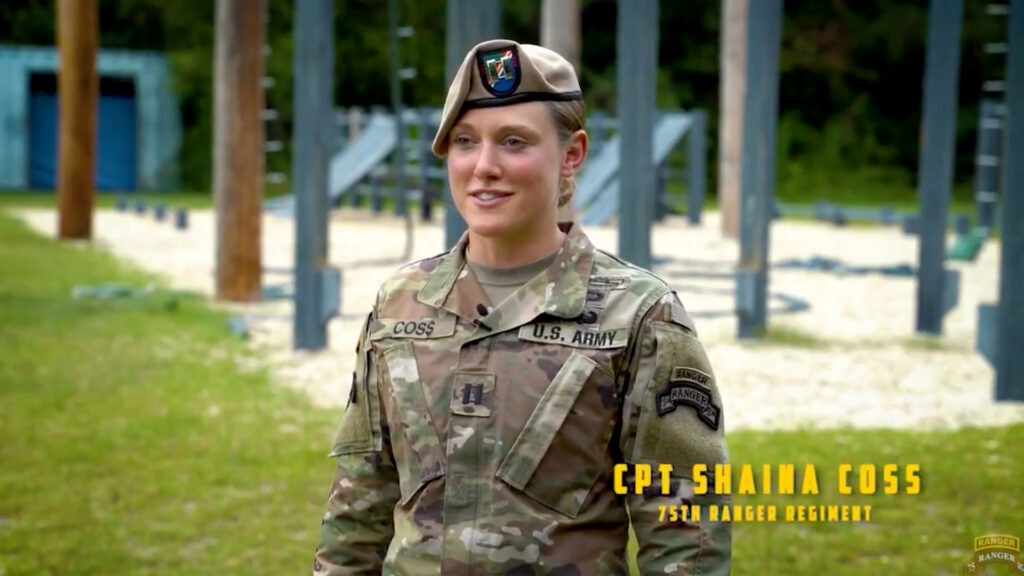 Despite her trailblazing service, the 30-year-old from Fairfax, Virginia said in a publicly-released video that her “infantry path has been pretty typical.” After graduating from the U.S. Military Academy at West Point in 2016 where she competed on the powerlifting team, Coss completed Army Ranger School — one of the first 10 women to ever do so — and then moved on to Fort Bragg where she led an infantry rifle platoon in the 82nd Airborne Division. Just months into being a platoon leader, she applied to be a part of the 75th Ranger Regiment, the Army’s elite special operations force.

She was the first female infantry officer in the regiment and went on to lead a Ranger platoon on a deployment to Afghanistan in 2019, which made her the first woman to lead Rangers in combat, according to a 75th Ranger Regiment spokeswoman.

Based at Fort Benning, Georgia, the 75th Ranger Regiment is the Army’s “premier direct-action raid force,” according to the service. Ranger School is one of the most difficult courses in the Army, pushing soldiers to their limits through rigorous training for more than two months as they work through the school’s three phases.

Coss said in the Army’s video that she was following in the footsteps of her father, who was also a career infantryman and a former Ranger. “What inspires me as a leader is just the men and women that serve alongside me every single day, and just waking up trying to be the best leader that I possibly can for them,” Coss said.

Coss also highlighted another trailblazer in the video, Capt. Kristen Griest, who was one of the first two women to graduate from Ranger School and became the Army’s first female infantry officer. Coss said Griest was a company commander in her battalion while she was stationed at Fort Bragg and was “a direct role model for me.” Griest also mentioned Coss during a West Point Founders Day address this year, saying Coss continues to inspire her.

Coss spoke out publicly this year about the Army Combat Fitness Test, which has received mixed reviews from soldiers, and women in particular. The test was altered earlier this year to score soldiers on a service-wide percentile separated by gender. While the Army maintained that the test was still gender-neutral because men and women were taking the same test events, women like Coss and Griest said the changes were problematic for those in combat arms.

“As the first and only female infantry officer to serve in the 75th Ranger Regiment to date, I know that equality will be achieved only when women are held to the same job-related standards,” Coss wrote at Military.com in March. “A meaningful way to do this is to immediately reinstate the black and gray tiered fitness standards.”

“[O]nce the Army determines the right standard to which soldiers should train, the final version of the ACFT should hold men and women in combat arms to it equally and should maintain branch-based minimum standards,” Griest wrote at the Modern War Institute. “Failing to do so will further marginalize women in these units rather than protect them, and will hurt the Army rather than prepare it.”

Cross said in the video that what keeps her going, and what helps her continue to be successful, is “trying to live up to the Ranger creed” — which says the soldier will “always endeavor to uphold the prestige, honor, and high esprit-de-corps of my Ranger Regiment” —  and “knowing that my job’s not complete until I’ve given absolutely everything that I have.”

Dog With Cancer Reunites With Military Dad After Deployment

US troops gave the Taliban and ISIS the middle finger in...

This is how to respond to a veteran contemplating suicide