Evacuees board a Boeing C-17 Globemaster III during an evacuation at Hamid Karzai International Airport, Kabul, Afghanistan, Aug. 23. U.S. service members are assisting the Department of State with a Non-combatant Evacuation Operation (NEO) in Afghanistan. (U.S. Marine Corps photo by Sgt. Isaiah Campbell). For the time being, it appears as if the original Forever War is now over.  The post All US troops are officially out of Afghanistan appeared first on Task & Purpose. 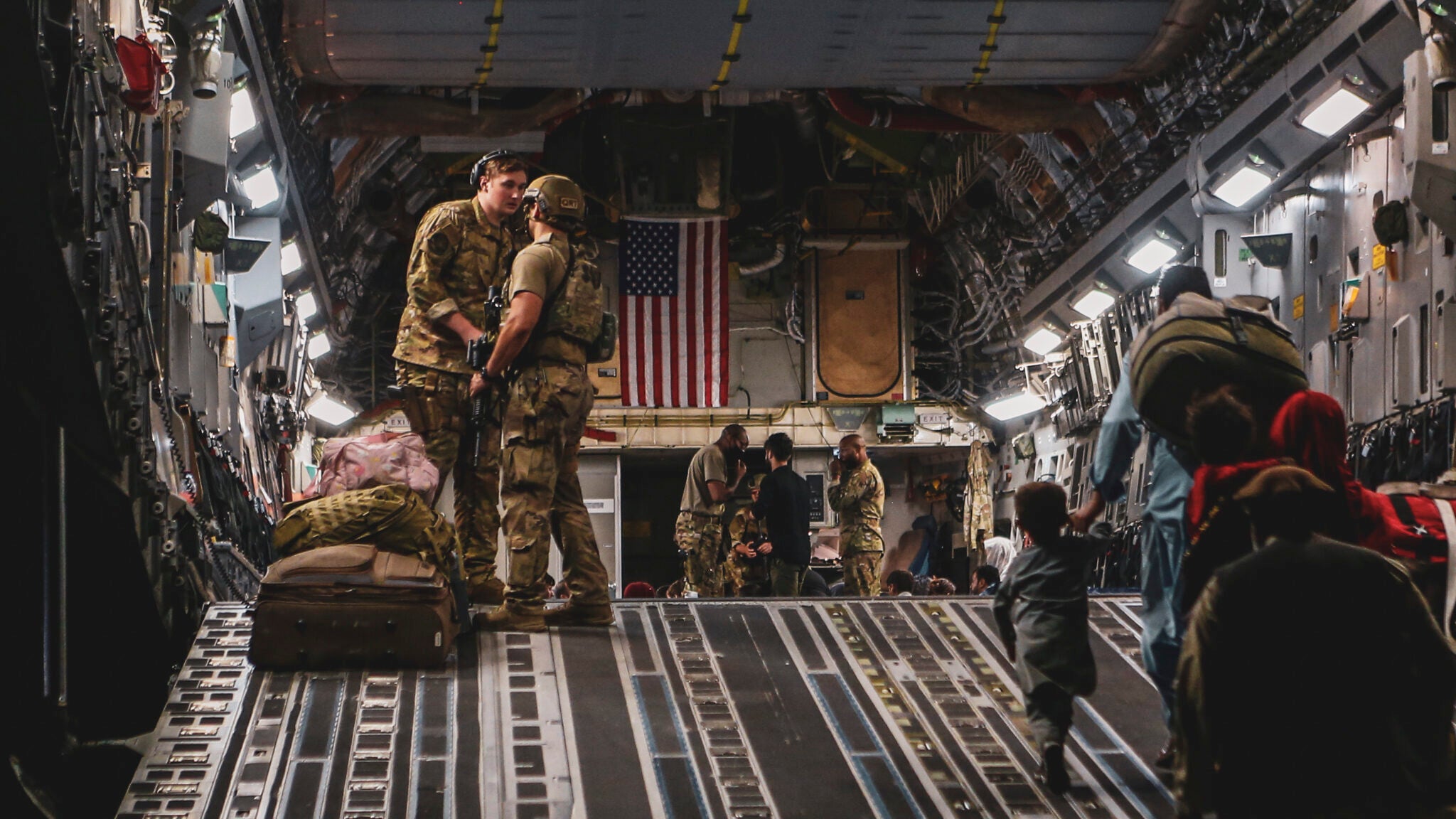 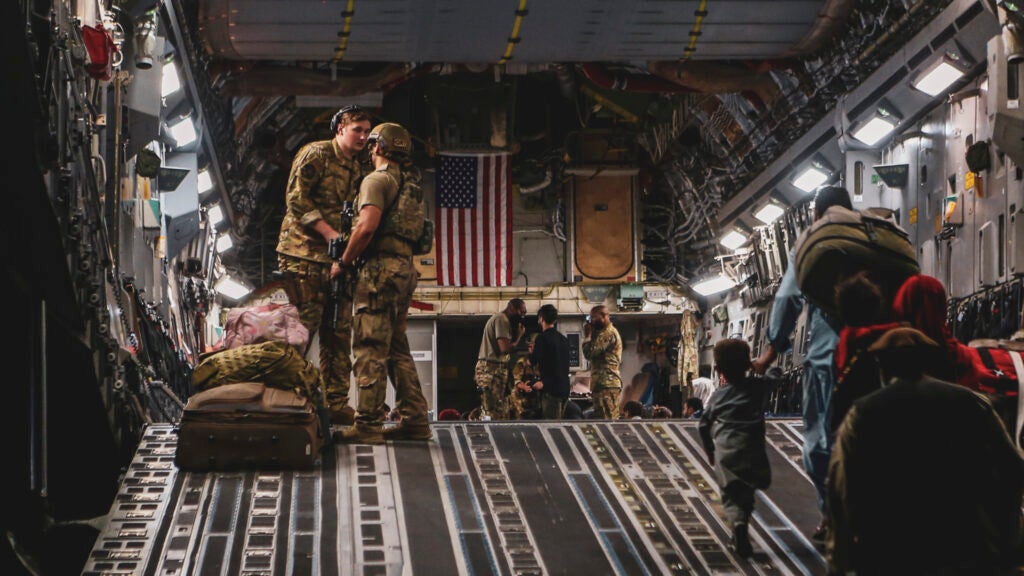 The last U.S. military aircraft has left Kabul’s Hamid Karzai International Airport, marking the end of the evacuation of Americans and Afghans and the final moment of America’s longest war.

The announcement was made during a Pentagon press briefing by Gen. Frank McKenzie, commander of U.S. Central Command.

“I’m here to announce the completion of our withdrawal from Afghanistan and the end of the military mission to evacuate American citizens, third-country nationals and vulnerable Afghans,” McKenzie said. “The last C-17 lifted off from Hamid Karzai International Airport on Aug. 30, this afternoon at 3:29 p.m., east coast time, and the last manned aircraft is now clearing the air space above Afghanistan.”

“While the military evacuation is complete, the diplomatic mission to ensure that additional U.S. citizens and eligible Afghans that want to leave continues,” McKenzie added.

The U.S. citizens who were unable to get past Taliban checkpoints outside the airport will have to find other ways to escape Afghanistan. And the tens of thousands of Afghans who helped the United States – and in many cases saved the lives of American troops – are now totally defenseless against the Taliban, who have shown no desire to offer mercy.

McKenzie said the number of Americans who were unable to be evacuated “number in the low – very low – hundreds” and the State Department will now work “very hard” to get them out.

“I believe that we’re going be able to get those people out,” McKenzie said. “I think we’re also going to negotiate very hard and very aggressively to get our other Afghan partners out. The military phase is over but our desire to bring these people out remains as intense as it was before. The weapons have just shifted – if you will – from the military realm to the diplomatic realm, and the Department of State will now take the lead.”

Before the last U.S. troops left Kabul, they rendered many pieces of military equipment left at the airport inoperable including a counter rocket, artillery, and mortar system (C-RAM), about 70 Mine-Resistant Ambush-Protected vehicles, 27 Humvees, and 73 aircraft, most of which could not fly to begin with, McKenzie said.

McKenzie also said he believes the U.S. military successfully evacuated all the hundreds of Afghan soldiers, who have helped guard the airport since Kabul fell to the Taliban on Aug. 15. The greatest security threat to the airport since then was posed by the Islamic State group, not the Taliban, he said.

“I think that we would assess that, probably, there are at least 2,000 hard-core ISIS fighters in Afghanistan right now,” McKenzie said. “Of course, many of those come from prisons that were opened a few days ago. So that number is up and it’s probably as high as it’s ever been in quite a while. That’s going to be a challenge for the Taliban, I believe, in the days ahead.”

The Taliban now control more of Afghanistan than they did prior to the Sept. 11, 2001 terrorist attacks, nearly 20 years ago.

Historians will debate for decades where the U.S. mission went wrong – and whether it ever had a chance to succeed.

After the Taliban were initially driven from power in November 2001, the United States decided to stay in Afghanistan with the ambiguous goal of turning the country into a functioning democracy.

But Afghanistan quickly became a sideshow for former President George W. Bush’s administration, which concentrated most of its time and attention on Iraq.

Former President Barack Obama ordered a massive surge of troops to Afghanistan that failed to yield a strategic victory against the Taliban. The Obama administration then declared an end to combat operations at the end of 2014 but ultimately decided to keep more than 10,000 troops in the country through the end of 2016.

Although former President Donald Trump initially approved a troop increase for Afghanistan, his administration later reached an agreement with the Taliban in 2020 to leave the country by this May, and Trump continued to withdraw American forces even as the Taliban unleashed a furious assault on Afghan troops and police.

The withdrawal agreement, which the United States struck without including the Afghan government, proved to be the final nail in the coffin for Afghanistan’s experiment with democracy. President Joe Biden’s decision in April affirming the end of the U.S. military’s presence in Afghanistan swept away the last obstacle between the Taliban and outright victory.

Biden has claimed the exit of U.S. troops from Afghanistan was bound to be chaotic, but history will not be kind to his administration for wasting precious weeks before beginning the evacuation of Afghans who had worked for the American government and their families in late July.

By that point, it was too late. The Taliban’s offensive in August snowballed and in 11 days they had captured all of Afghanistan’s major cities including the capital, Kabul.

The scenes of desperation outside the walls of the Hamid Karzai International Airport for the past two weeks have stunned many, including those who volunteered to serve following the terror attacks of Sept. 11 — which begat the war in the first place.

Although American troops have bravely evacuated more than 122,000 people, countless others have been left behind.

For the time being, it appears as if the original Forever War is now over.

This story was updated on Aug. 30 with comments from Marine Gen. Kenneth McKenzie Jr.

The post All US troops are officially out of Afghanistan appeared first on Task & Purpose.

Review: the Timberland Mt. Maddsen Mid Leather hiking boots are made to excel in...

In Honor Of Those Families Who Serve, One Generation After...

Review: To the firing line and back with the Vertx COF...

When American Independence Was Made Official: The Signing...

How To Honor And Support Gold Star Families This And Every...

What Does A Green Porch Light Mean?

"Dancing With the Stars" sent its third and fourth celebrity and pro dancer pair...